Drew DeSilver of the Pew Research Center has some terrific charts on how the average size of American homes in has ballooned since 1970: 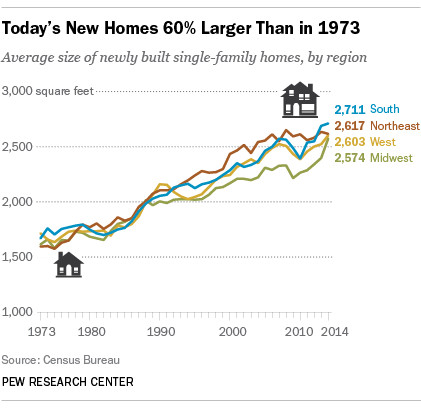 The energy angle here is particularly fascinating, though.

Overall, American homes today are about 31 percent more energy-efficient (as measured in energy use per square foot) than they were in 1970. But because they’re so much larger, and square footage has risen about 28 percent, on average, there’s basically been no change in overall energy intensity. The two trends balance each other out: 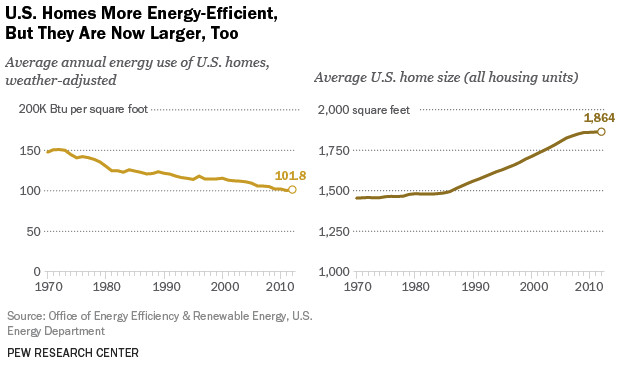 You could read this chart in one of two ways. First, as DeSilver puts it, this suggests the “growing girth” of US homes has wiped out basically all the savings from our hard-earned efficiency improvements. Not great news from, say, a climate change perspective.

Or there’s a more optimistic gloss: All those efficiency gains have allowed us to own much bigger houses (and more stuff in those houses) without a corresponding explosion in energy use. It’s a net boon for consumers, you might say.

But before we can settle this dispute, it’s worth looking in more detail at why homes in the United States have gotten so much more energy efficient over time. Partly it’s due to advancements in our refrigerators, boilers, dishwashers, and so on. But another surprising factor here is the fact that more and more people are moving to the South.

How home energy use is changing: less heating, more appliances

Back in 2013, the Energy Information Administration posted a valuable analysis looking at how home energy use in the United States has shifted over time. 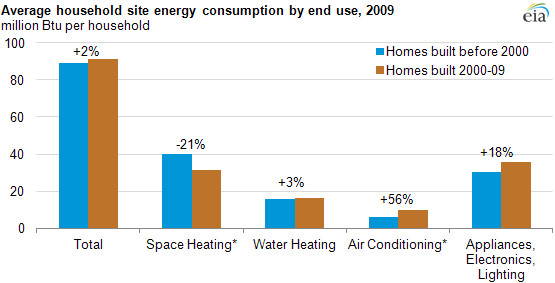 The biggest change over time has been in heating. Newer homes use about 21 percent less energy for space heating than older homes do. Part of that is due to improved insulation and furnace efficiency. But another major factor, EIA notes, is that a greater proportion of new homes are being built in the warmer South and Southwest. They simply don’t need as much heating.

The flip side, of course, is that those homes use more electricity for air conditioning in the summer. But as it turns out, it’s a lot more energy-efficient to cool a house than it is to heat it. There are lots of reasons for that, as Emily Badger once explained: On an especially hot day in Miami, you might have to bring the temperature down from 100°F to 70°F. On an especially cold day in Minneapolis, you might have to bring the temperature all the way up from 0°F to 70°F. The latter is a much bigger gap to fill. Plus, she points out, “the typical air conditioner is about four times more energy efficient than the typical furnace or boiler.”

So, on balance, the shift in US population to the South and Southwest has saved energy for heating and cooling homes. And you see that in the graph above.

But that’s not the end of the story, either. The other crucial fact about new homes, again, is that they’re much bigger and hence contain more gadgets and appliances: EIA found that newer homes are much more likely to have at least two refrigerators, to feature at least two or more televisions, at least two computers, and so on.* These appliances are all far more energy-efficient than they were back in the 1970s (due, in part, to increasingly strict federal standards). But we have more of them. Add it all together, and energy intensity has basically plateaued.

Again, there are two ways of interpreting these trends. The pessimistic take is that all our efficiency gains have been for nought. Anything we do to save energy just gets counterbalanced by growing consumption. Build a more efficient refrigerator, and people just decide to buy two. (There’s even an argument that improving efficiency can causepeople to consume more energy by making it cheaper, a phenomenon known as the “rebound effect.” Careful empirical studies have found that this effect is indeed real, although it seems to be relatively small in rich countries like the United States. It’s a bigger factor in the developing world.)

Alternatively, you could look at it this way: As Americans get richer, they’re invariably going to want bigger homes and more gadgets. There’s no altering that trend. So improvements in efficiency can at least ensure that our energy needs don’t explode as we get wealthier. Arguably, that’s what’s happening in the United States. Americans today have larger homes and more appliances while using roughly the same amount of energy per household as they used to. It’s a boon for conservation, at least when compared to the counterfactual.

There’s something to both arguments, especially when we start thinking about global warming. Improving energy efficiency, by itself, won’t necessarily lead to a decrease in energy use and carbon dioxide emissions. But it’s almost certainly going to be a crucial component of those efforts.